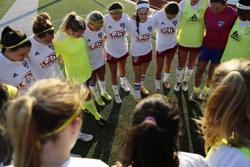 Tyler Powell isn’t the only new face for the FC Dallas WPSL club.

After Ben Waldrum left to accept at job at the University of Pittsburgh as its women’s soccer coach, Powell returned to Dallas to help build on a foundation already solidly set.

Powell called the decision to be FC Dallas head coach a “no-brainer.”

“I was an assistant last year during the preseason time, but I didn’t carry on once the season started,” Powell said. “Because of Ben going to Pittsburgh, we had to reshuffle some things, of course, and when our director of coaching asked if I was interested, especially with what Ben has built, it was a no-brainer.

“There’s a good foundation in place and the biggest thing is to build on it.”

Powell will have some returning players from various colleges and some new players on his roster. An official roster is not set, and FC Dallas had to postpone its first tryout date on April 6 because of inclement weather.

Despite the cancellation, Powell said the lost tryout doesn’t set the team back and that another tryout is set to replace the lost day.

“We have a large player pool from the youth side of the club, a bunch of alums that are playing at four-year school and several players from last year’s team that want to come back,” Powell said. “We want to get more tryouts and practices in before the season starts. Given the situation of the league and with the players being off at school, I don’t think the tryout really puts us any further behind or any further ahead.”

Powell is looking forward to the next tryout, scheduled for April 20 from 7 to 9 p.m. The make-up tryout will occur after the April 20 date.

“We’re thinking that it’s going to be after the other date because of the timing of everything,” Powell said. “We’re looking at a date the following week or early May.”

FC Dallas begins its WPSL season on May 25 against FC Wichita at Dr. Pink Stadium in Frisco, Texas. The team is in the Southwest region alongside FC Wichita, Fortuna Tulsa, Little Rock Rangers, Oklahoma City FC and Texas Spurs FC.

Powell said it’s good to face teams in other areas to promote the club and the league.

“On the women's side, we have a good product that you can put on the field,” Powell said. “Whether it’s men’s or women’s, when you go to places that don’t have the luxuries that we have — like an MLS club attached — the more the game gets out there, the better it is for everyone.”

When it comes to the travel, Wichita is FC Dallas’ furthest trip. However, Powell explained that players are used to the travel, especially the collegiate athletes.

“I know in years past you have teams in some remote areas and metro areas,” Powell explained. “The more teams you have all over the place is the better.”

With the schedule set and tryouts coming soon, Powell’s biggest goal right now to make sure the club is aligned and prepared for the upcoming season ranging from commitments to when players can arrive and participate to normal operations.

Powell is aiming to award the support with success during the season. However, his biggest goal is expanding and building the women’s professional soccer game in the United States.

“I have two daughters and one is old enough to play, and she is,” Powell said. “Since we don’t have a full-blown, professional team in Dallas yet, it’s giving the younger females an opportunity to look up, especially within the club, and think ‘I want to be that player one day.’ A lot of our players are returnees from the youth club, and they see that it’s attainable.

“The biggest thing is growing the women’s game more, making it better and giving the future generation something to look up to.”