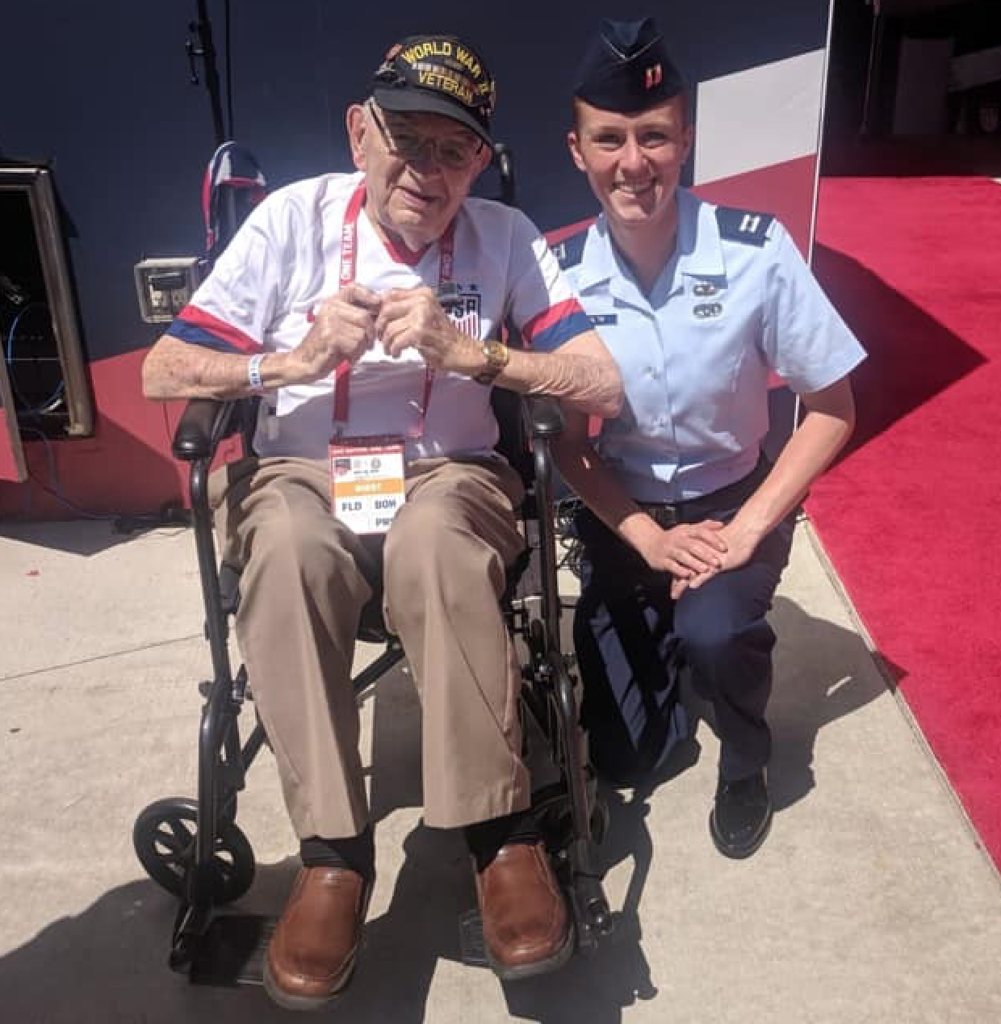 When the United States Women’s National Team played Mexico in a friendly on Memorial Day Weekend, it was looking for one last opportunity to prepare for its FIFA World Cup title defense.

It was also celebrating the men and women that have sacrificed everything to serve our country.

Peter DuPre a 96-year-old WWII veteran performed the national anthem on his harmonica, and Ariel Saltin, a current member of the All Armed Forces Women's Soccer Team, served as honorary captain.

For Saltin, who played for WPSL club Charleston Fleet FC and is now a logistics officer for the United States Air Force, the opportunity to honor the military personnel that have worked to protect this country, was a once in a lifetime experience.

“To have a chance to honor a lot of my mentors, my peers and the people I look up to, whether historical figures or people currently serving, it was a really special experience,” Saltin said.

Saltin has a history with these types of special occurrences.

At the conclusion of high school, Saltin elected to pursue a career in military service and chose to attend the United States Air Force Academy. During her time at the Academy, Saltin received a Bachelor of Science in Foreign Area Studies, minored in French, and played for the Air Force Academy soccer team.

After appearing in 17 games as a sophomore, Saltin suffered a string of injuries that forced her to step away from the soccer program and propel her interest into another field — international communications.

“I had gotten injured to a point where playing was no longer healthy for me,” Saltin said. “Being at the Air Force Academy, I was provided an opportunity to spend a semester abroad at the French Air Force Academy.”

The opportunity to immerse herself in both French culture and linguistics was one that would shape the early portions of her military career upon graduating from the Academy. Shortly after her graduation, Saltin was selected to the Language Enabled Airman Program. After a few months as a student in the program, Saltin’s test scores indicated that she was ready to take on a position facilitating communication among French speaking nations and the United States.

Two years later, while serving at Joint Base Charleston, South Carolina, the program reached out to Saltin looking for a candidate to assist a team of marines in training the Cameroon military in its fight against terrorist organization Boko-Haram and other forms of offshore piracy. So, Saltin traveled to Africa for the first time and lead the communication between the United States military personnel and the members of the Cameroon military.

At the conclusion of her time in Cameroon, Saltin returned to the United States to continue serving at Joint Base Charleston, when she and a few friends heard of an opportunity to continue their soccer careers: a tryout with the WPSL’s Charleston Fleet.

Playing with the Fleet was one of the greatest athletic experiences of Saltin’s career. In her lone full season with the Fleet, Saltin helped lead the team to a 10 win season and a Carolinas Conference Championship. More importantly she faced the challenges of learning the nuance of new positions on the field.

“I was pretty much always a central midfielder,” Saltin said. “When I played with the Fleet, I had the opportunity to learn about outside midfielder and outside back.”

Midway through her second season with the Fleet, Saltin was forced to leave the team after being recruited for a tournament with the All Armed Forces Women’s Soccer Team. Fittingly enough, in her multiple years with the AAF team, Saltin has been primarily featured as an outside wing player.

For Saltin, the opportunity to compete for her country is something she will always cherish.

“It is so exciting for us to be a part of this huge global network of military athletes,” Saltin said. “The opportunity to spend time with these very athletically, mentally, and emotionally strong women from all branches of service, working towards this incredible goal has been amazing.”

When Saltin spoke regarding her experience as honorary military captain at the U.S. Women’s National Team Game, she was quick to deflect the attention away from herself, citing the fact that it represented all military personnel and all of her teammates with the AAF Women’s Soccer Team.

Much as she always seems to do, Saltin looked to direct the narrative back to the bigger picture of duty, responsibility, and honor.