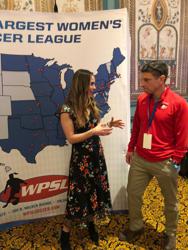 Heather Mitts was the featured speaker at the 2018 WPSL Annual General Meeting in Las Vegas. [PHOTO BY SHAWNA AYALA]

LAS VEGAS – Heather Mitts spoke to more than 100 attendees at the 2018 WPSL Annual General Meeting, offering guidance about lessons from her most influential coaches and detailing the adversities that she overcame during her 15-year national team career.

Mitts, who played two seasons in the WPSL, also shared memories from her time in the league as well as its importance within the sport today.

A: I played for two teams, and both were different experiences. I played for Tampa Bay in college, so that was great to be playing at a high level when I wasn’t playing with my college team. Then in 2005, it was a down year for the national team. My team in Orlando was made up of college, professional and international national players. Our team went to the championship game. It was a fond memory playing for the Orlando Krush because it allowed me to continue to play at a high level and prepare for the national team.

What is your fondest memory playing in the league?

Just making it to the championship game, just having that many teams in the league and being one of the two that makes it to the final, it was a huge accomplishment.

What kind of chemistry did the Krush have and how difficult was it to make that playoff run against so many competing clubs?

I look back at the mix of players we had, both older and younger, and I think we gelled well together on and off the field, and I think that showed and was part of the reason we had so much success.

How do you view what WPSL is now compared to when you played?

I’m excited to see there are more than 110 teams. The league has grown, and that shows the dedication from the owners, general managers, coaches and players to be able to have it succeed. It’s dedication and an inspiration, and it continues to grow. It’s exciting.

What role does the WPSL play in regard to the national team, NWSL and other women’s soccer leagues?

I think of Danielle Fotopoulos, who played on my Orlando Krush team. Michelle Akers was on Danielle’s first WPSL team. So it’s a breeding ground and bridge for national team players to the next level.