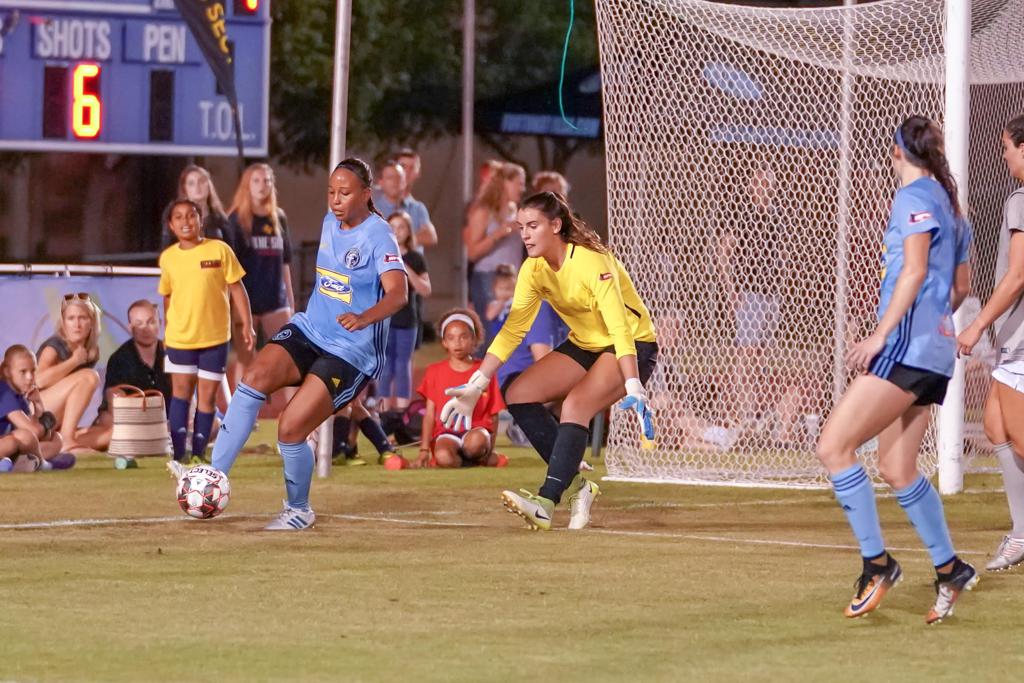 Yolanda Thomas is no stranger to the game of soccer.

Playing at the highest level in Sweden through her youth career, she learned every aspect of the game, analyzing the plays, perfecting her skill and often becoming a captain, helping her teammates become the best versions of themselves on the field.

She also played four years at Oklahoma State University where she was named Big 12 Conference Player of The Year. She was also a NCAA All-American, a Hermann Trophy semifinalist and was capped by the Swedish National U15-U23 Teams.

With all her success, Thomas had plans to return to her native country and sign with a well-known Swedish team after college, but injuries kept her here in the states and on the sidelines – at least temporarily.

Thomas, during both her playing career and after a back injury, also engaged in coaching opportunities with various youth, club, high school and collegiate teams. She coached locally at the University of Tulsa and is now the head coach at Rogers State University in Claremore, Oklahoma. She had seemingly found her place on the field.

But early on in her coaching assignments, she questioned if she had grown tired of the game that she had grown up loving. She was searching for a different type of intellectual challenge, one that brought her to grad school and then to an eventual position in a local bank. She quickly learned, however, that soccer ran in her veins and that she was, in fact, fulfilled by the challenge of the game and wanted to check back in full-time.

And though Thomas knew she wanted to positively impact players, she never initially set out to coach the women’s game. She felt she was too serious for it - that the younger players wouldn’t respond well to her. But that all changed after a few pivotal moments in her coaching career.

“It is truly a privilege to impact girls and young women as players, but also as people,” Thomas said. “I never take this opportunity for granted, and I don’t believe I’ll ever grow out of loving this game and the people in it.”

After many successful years coaching, however, Thomas was going to get her chance to return to the field as a player. She was offered the chance to sign with Fortuna Tulsa last year.

Her return to play was short-lived though, for after a successful inaugural season, Fortuna asked her to become the head coach in 2019. It was an offer she says she just couldn’t refuse, and the transition back to coaching actually felt much more natural than lacing up her cleats the previous year.

“This year isn’t so much about me, but this amazing moment in history for women’s soccer in general,” Thomas said. “I am keenly aware of the progress the women’s game has made in the last several months, and am super excited to support a strong women’s team during a year when the USWNT team also gets to play in the World Cup.”

Although filling a stadium of that size will be a unique challenge, Thomas believes her team should be playing in the larger venue and is confident that Tulsa and the surrounding communities will embrace the women’s game. She believes her players will be recognized as the true athletes they are and that this season will be something special.

After Fortuna Tulsa’s season opener was postponed last week, the team will kick off their 2019 season against Oklahoma City FC on Saturday, June 1 at ONEOK Field. And Yolanda Thomas is ready to prove that her team deserves to be at that stadium.