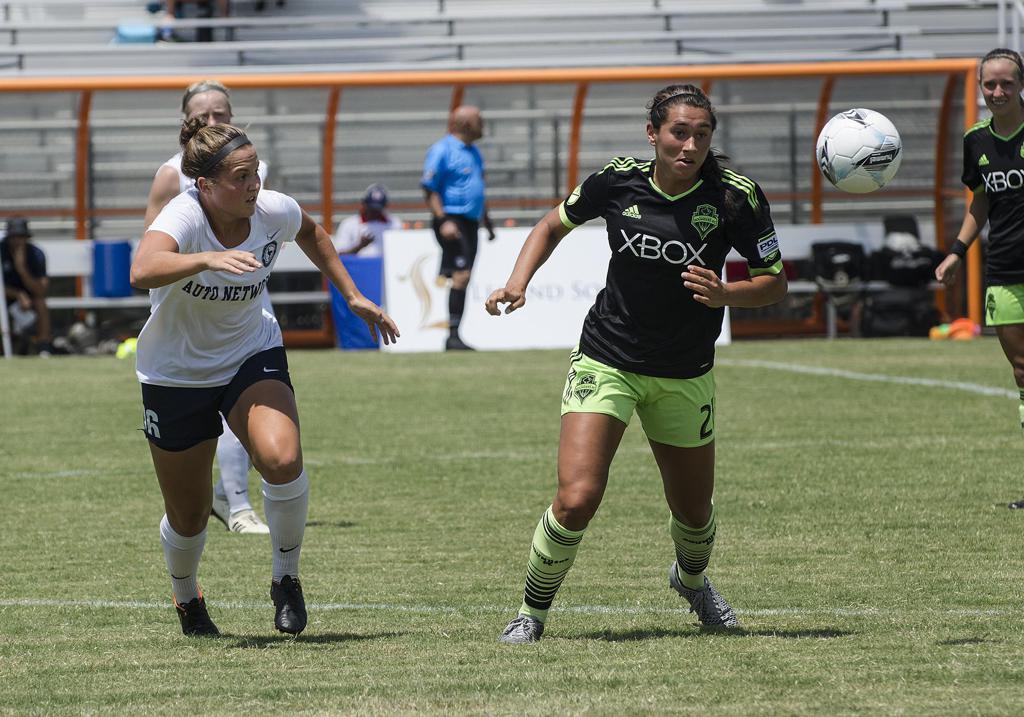 STILLWATER, Oklahoma — As the Women’s Premier Soccer League season comes to a close at championship weekend, arguably the most talked about match of the year will be Pensacola FC and the Seattle Sounders Women.

Friday’s semifinal will not only feature two of the strongest clubs in recent WPSL years, but it will also be a rematch of the 2018 WPSL Championship final, which saw Seattle win its first league title 3-1.

Both teams had dominating regular season campaigns and have carried the momentum through regionals to seamlessly cruise into the championship weekend.

Pensacola proved to be the class of the Gulf Conference, winning all eight of its conference matches with relative ease. The team’s stiffest test of the season came in Week 3 win against MS Blues SC, a match which Pensacola narrowly escaped with a 2-1 victory.

The Sounders proved that they are still the strongest team in a surprisingly stiff Northwest Conference. After falling to expansion side Vancouver Island FC in their first match, the Sounders haven’t lost since, culminating in a 4-0 victory in their West Regional final against previous unbeaten California Storm.

Thus far, Pensacola has proven to be one of the most dynamic offensive teams in the league scoring 53 goals in eight matches. The team is unique in the way in which they feature a number of dangerous scoring threats, most notably their trio of Briana Morris, Mollie Rouse, and Ana Paula Silva Santos.

To make matters more difficult for the Sounders’ defense, Pensacola added even more firepower to their offense when Nigerian Uchenna Kanu returned to the team after playing for her country in the FIFA Women’s World Cup in France.

Kanu was arguably the best WPSL player in the 2018 season, and coach David Kemp has been pleasantly surprised with Kanu’s ability to seamlessly fit back into the roster after an extended absence.

“It has been such a natural fit, like she has been with us the entire season,” Kemp said. “It’s not like there was a team before and team now. It’s just like we got a little bit stronger.”

Seattle has been working to strengthen its squad all season, anticipating the difficult road they would face in the playoffs. Fortunately, the team has been forced to scratch and claw their way through a rejuvenated Northwest Conference that has been strengthened by the addition of Vancouver Island FC and the Spokane SC Shadow.

Team co-captain Kirsten Pavlisko, who is currently the second-leading scorer on the team despite being a defensive player, has had quite the past year, winning the 2018 WPSL title with Sounders women and then winning the NCAA championship at Florida State in her freshman season. She views the challenging regular season as a blessing in disguise for the battle tested Sounders.

“Being in the Northwest Conference has served this team well, challenging us both physically and mentally,” Pavlisko said. “We’ve had to overcome adversity and situations where we’ve been down by a goal, but it’s only made the team strong. As the season has gone on we are working more as a team.”

Unlike the regular season though, every game now comes with the ultimate pressure: Winner moves into the championship game while the loser returns home. This semifinal match up seems to have increased pressure, given it’s a rematch of when Seattle took the Jerry Zanelli Cup back to Washington and Pensacola returned home empty handed.

This year, though, Kemp’s squad is simply excited for another opportunity to compete for a championship as it looks to win its first title since 2012.

“The spirit of the camp is really high,” Kemp said. “There’s really good vibes all around, everybody’s happy and everybody’s enjoying playing the game the right way.”

Despite the increased pressure of trying to repeat as champions, the Sounders are keeping an even keeled approach, viewing Pensacola as just another competitor rather than a rival.

“We are keeping our heads straight and taking it one game at a time,” Pavlisko said. “If you don’t focus on the game you’re about to play, there may not be a next one.”