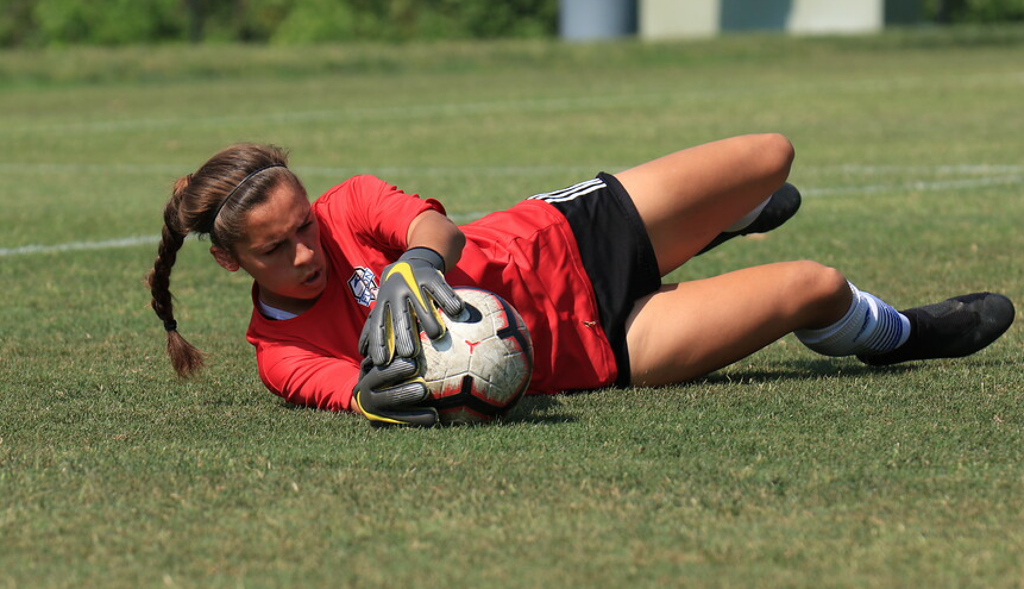 GREENSBORO, North Carolina — Playing goalkeeper in the WPSL is no easy task.

Week-in and week-out, shot blockers throughout the league face a litany of top-level collegiate talent and aspiring professionals eager to find the back of the net. For young keepers, especially, adjusting to a faster speed of play and increased offensive firepower can be too much to handle.

North Carolina Fusion U-23 goalkeeper Madison Howard was up to the task.

When Howard returns to Greensboro Day High School for her senior year this fall, she will have a new feather in her cap after being named the 2019 Carolinas Conference – North Division Defensive Player of the Year.

After playing with North Carolina Fusion’s U-17 squad last season, Howard, 16, was called up to play for the clubs U-23s in this summer’s WPSL campaign.

For much of her life, Howard has arrived earlier than most would expect. Howard signed her letter of intent to play for Wake Forest University during her sophomore year of high school, so perhaps unsurprisingly she showed an uncanny ability to stand her own in goal while being one of the youngest players in the WPSL. The Fusion won the competitive Carolinas Conference North Division this year, in large part due to Howard’s astonishing 0.67 goals against average.

Fusion coach John Pardini views Howard’s success as a testament to her calm and collected approach to the position.

“Madison is a very confident kid,” Pardini said. “She is someone who has consistently improved her game throughout her career, had a tremendous amount of success at the youth level and has continued that with the WPSL group. Her communication, composure, and belief in herself is really unmatched.”

Perhaps that self-belief is only matched by Howard’s bravery. On a consistent basis, Howard displayed an uncanny ability to challenge balls in the air and come out and stifle breakaway situations for opposing teams.

In order to succeed against much older players, Howard was forced to excel in areas of the game that few youth players master prior to college. Pardini cited Howard’s distribution, positioning, and instincts as qualities that make her unique for her age.

“She’s great with balls in the air, she can make every save needed, and she can cover everything in terms of set pieces and shots from distance,” Pardini said. “Her biggest attribute though is her leadership and that belief that she is the top player, and she certainly carries herself that way.”

Although Howard has one year left to play at the high school and club level, the local soccer community is already looking forward to watching her play at Wake Forest.

Adapting to one of the top collegiate conferences in the country is a daunting task, but Pardini has little doubt Howard will prove up to the challenge.

“If she is given the opportunity, she is going to have a tremendous amount of success,” Pardini said. “The goalkeeping position is a funny one, if you get an opportunity you have to seize it. I’m surprised she hasn’t been called to a national team camp.”

One day that call may come. For now, Howard will continue to be known as one of the top goalkeeper prospects in the country and her recognition as the Carolinas Conference Defensive Player of the Year.