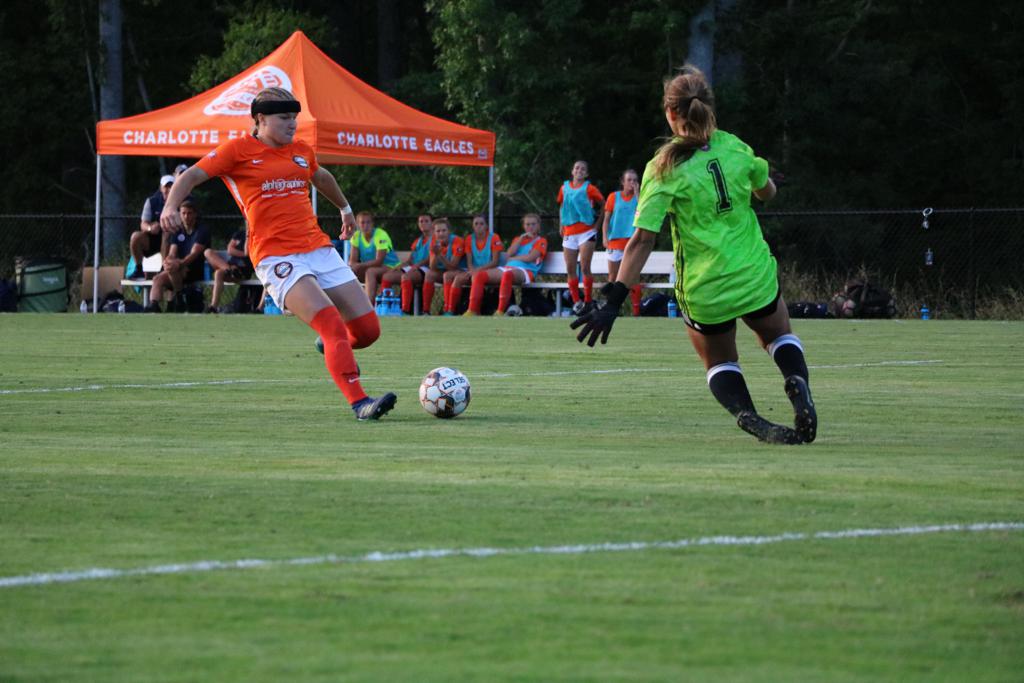 MATTHEWS, North Carolina — Carrying a team offensively is no easy task with opposing teams approaching the one dominant offensive player, double-teaming and scheming to keep the ball away from the lone threat.

For the Charlotte Eagles’ Skyler Prillaman, facing defenses with a sole game plan of stopping her became routine throughout this WPSL season.

Prillaman, who was named the 2019 Carolinas Conference – South Division Offensive Player of the Year, rarely took notice of the opposing team’s tactics. Her mind was on one thing — finding the back of the net.

“I was never really focused on what the other teams did,” Prillaman said. “I never focused on the opponent. We played our game, and wherever the ball fell, we put those chances away.”

This year, Prillaman put the ball away quite a bit, leading the Charlotte Eagles with 11 goals in only nine matches. Her incredible goal-scoring spree included three multi-goal games and two hat tricks as the Eagles enjoyed an undefeated regular season in route to a conference championship.

Although most of the teams in the South Division noticed Prillaman’s game-breaking pace and uncanny ability to find the back of the net, Eagles coach Sam Hope cited Prillaman’s leadership skills as the quality that puts her a notch above the rest.

“Having Skyler back as a returner and a leader was huge as a cultural piece,” Hope said.

Hope was eager to touch on Prillaman’s instincts more so than her skills when it came to her goal-scoring ability.

“Skyler just has a nose for goal,” Hope said. “She believes she can score, and she does. She’s strong, she’s powerful, her pace alone allows her to get in behind defenses. More than anything though, she just has a natural nose for goal.”

This year, the Eagles were known for their defense. The team only conceded a remarkable three goals throughout the regular season. Offensively, the team scored enough, with Prillaman carrying much of the offensive burden, to complement the stingy defense throughout the season.

Yet despite being the only double-digit scorer on the team (the next closest Eagles goal scorer tallied three goals on the season), Prillaman was eager to sing the praises of her teammates.

“I have to give credit to my team for putting me in good situations, trusting me with the ball, and putting it in the back of the net,” Prillaman said.

Prillaman, who is a sophomore at High Point University, will be looking to find the back of the net again soon in the collegiate ranks. As a freshman, Prillaman garnered Big South All-Conference Honors, and was also named the Big South Freshman of the Year.

With a year of experience under her belt, Hope believes the sky is the limit for Prillaman.

“I think she has the tools to pursue a career professionally someday,” Hope said. “She’s just getting started as a player. I’m excited to follow along with her as she finishes her college career, but I definitely don’t think this is the last time we will be seeing Skyler. I think she has many, many years ahead of her.”