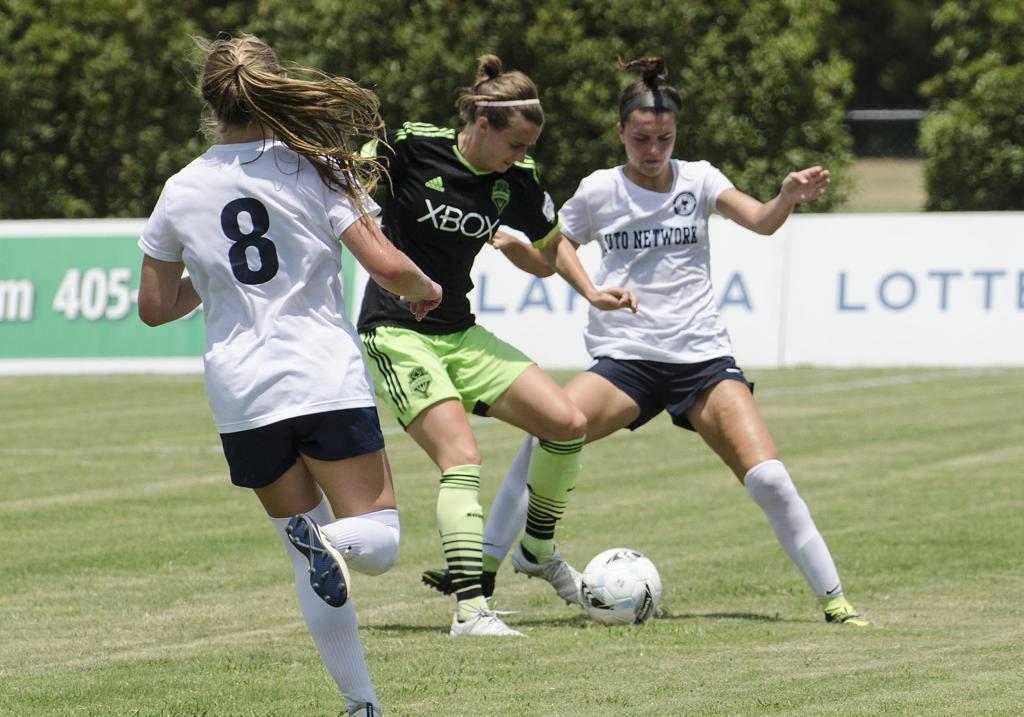 The first Seattle goal in the WPSL Championship match came at the end of an attacking move that went from the feet of the Sounders Women goalkeeper to the back of the net in six passes.

The second goal — the goal that proved to be the match winner — started with a Celia Jimenez Delgado interception and ended with a header from Delgado into the back of the net.

Georgia Cloepfil provided the service for both goal scorers. Her first assist was a devilish first-touch backheel to Kirsten Pavlisko. The second was a cross to Delgado at the back post to conclude a crisp combination play at the edge of the penalty area.

Few players would have handled those moments with the composure Cloepfil, 26, did. But then again few players have played high-level soccer on four different continents.

In 2014, after finishing her career at Macalester, a small liberal arts college in Minnesota, Cloepfil was just looking for “maybe another year” of playing soccer. That quest took her across the Pacific Ocean, where she began her professional career in Australia. Then it took her to the Swedish top flight. And then to South Korea.

In early 2018, it brought the native Portlander back to the Pacific Northwest where she landed with Seattle Sounders Women. Looking back on her first WPSL season and winning the championship, Cloepfil said her time in Seattle rates highly in her impressive soccer career.

“It was more special than I even really thought it would be,” Cloepfil said. “The whole weekend was really amazing and just really highlighted how unique this Sounders Women organization is and how much they did for us all throughout the season.”

Despite their amateur status, Sounders Women is run, from the owner to the training staff, with more attention to detail than some professional teams Cloepfil has been on.

“They take their jobs really seriously, and it showed,” Cloepfil said. “Especially on the championship weekend, when we had so much to pay attention to in terms of recovery and performance and all that. They had really thought about it all and really took care of the players.”

The admiration was mutual. Seattle coach Scott Ford said Cloepfil was a leader on-and-off the field and that her "mature head" and "game management" were vital to Seattle coming home with the Jerry Zanelli Cup.

With Cloepfil's help, Sounders Women doubled their goals-per-match average from a season ago on their way to winning the league.

The path to a career in the sport of soccer hasn’t always been a clear one for Americans, especially women. Depending on how well she’s paid in her overseas league, Cloepfil will often pick up a part-time job to supplement her income. But Cloepfil’s journey shows it can be done,
and she thinks the WPSL plays a vital role in helping young women further their careers.

“In other countries, there’s much more of a club organization and people don’t go to college,” Cloepfil says. “So the WPSL is cool in that way, especially the Sounders. They have a lot of players who have come back for multiple years and kind of had this as their home base throughout all the different stages of their career and throughout college. So it definitely seems important in terms of having consistent play, having a consistent community.”

What’s next for Cloepfil? She’s looking for an opportunity to head back overseas, but there is nothing solid yet. If she is still in town when the University of Washington starts its soccer season in August, she wants to go watch some of her Sounders Women teammates, who star for the Huskies.

“It’s still just like, ‘Maybe another year,’” she says. “But it’s been really amazing, and I feel fortunate to have had the experiences that I’ve had.”