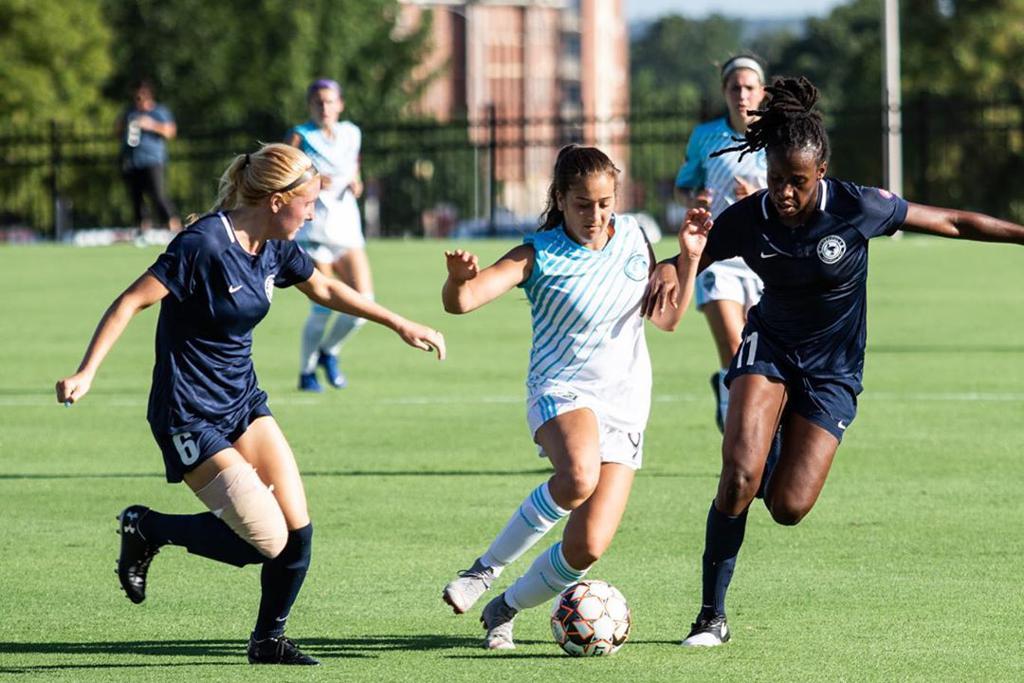 Pensacola has been dominant throughout its season, for it now is the lone undefeated team in the league entering Sunday’s final. Seattle, though, provided Pensacola with much more of a challenge than the team is accustomed to seeing.

After both teams had a few chances early, with Seattle utilizing a strong wind advantage in the first half to spark some counter attack opportunities, Pensacola struck first in the 14th minute with forward Briana Morris’ goal. It arrived when Mollie Rouse claimed possession near the midline, noticed that Seattle’s backline pushed high, and sent  the ball to Morris over the top.

Morris had the mental wherewithal to hold off a Seattle defender, take a tight touch into the box, and slot the ball past the outstretched arms of Sounders goalkeeper Isabel Jones.

Pensacola coach David Kemp viewed Morris’s goal as the lift the team needed to play their way into the game.

“It was a real boost for us because both teams were trying to settle in and play,” Kemp said. “To get a goal like that, it just made us realize we needed to relax a bit.”

Right before halftime, Pensacola seemingly appeared in control when Nigerian international Uchenna Kanu scored in the 43rd minute. Kanu was able to beat three Sounders defenders, find her way in front of goal and shoot past Jones, to give Pensacola a commanding 2-0 lead heading into the break.

Whereas in the first half Pensacola displayed their dominance, the second half was an entirely different story. Seattle came out aggressively, taking chances in order to manufacture offensive opportunities. The risks eventually paid off when Summer Yates capitalized on a Seattle corner kick and found the back of the net in the 64th minute.

With the match now back to a one goal game, Seattle’s momentum was fleeting. Almost immediately after the kickoff, Kanu won the ball near midfield and sparked a Pensacola counter attack. After a deflection in the Seattle’s box, Morris won the ball back and laid off a perfect ball back to Rouse, who launched a rocket into the upper portion of the net and provided Pensacola with another insurance goal less than a minute after Seattle’s goal.

“That goal really showed what this team is about,” Kemp said. “Nothing affects them, they just keep playing. They are so deadly on the counter attack and don’t allow the other teams to relax. That was a huge moment in the game.”

Sounders Women worked diligently to find opportunities throughout the final 25 minutes of the match and were able to draw the score back to 3-2 in the 81st minute on an Alex Hobbs goal in the run off play. Seattle had numerous of chances to equalize during the tense closing minutes, with Pensacola goalkeeper Kathryn Scheele saving one shot near-post and another Seattle shot sailing just inches above the bar.

Ultimately, Pensacola’s offensive prowess proved too much to match.

“Seattle is a very well coached team — they made some great adjustments in the second half and provided us with all the problems we could handle,” Kemp said. “They were a great champion and I’m sure they will be back next year.”